The clinical case of this patient is a typical case of recovery from Nuss and Ravitch techniques that failed to correct the sunken chest. Since the patient has no functional problems, the implant is the best way for her to correct her thoracic malformation and breast asymmetry.

The following clinical case is a review of a Pectus Excavatum treatment after the failure of the Nuss and Ravitch techniques on a single patient. The review is a collaborative work of 3 Spanish surgeons from Sagrat Cor University Hospital in Barcelona.

Dr. Juan José Fibla-Alfara, specialist in thoracic surgery (MIR training at the University Hospital Santa Creu, Sant Pau)3), member of the European Council of Thoracic and Cardiovascular Surgeons (FETCS), Associate Professor of Surgery at the University of Barcelona since 2015.

Doctors Molins and Fibla have written and co-authored numerous articles on thoracic malformations and more specifically on the Nuss technique4, introduced in 1998 by American surgeon Donald Nuss. Their latest article on the subject (2016) deals with their experience feedback in Spanish thoracic services and questions the use of this technique for the treatment of Pectus Excavatum5.

Molins and Fibla have respectively published 105 and 81 articles concerning thoracic surgery in national and international magazines6.

Dr. Hernández has specialised in understanding the functioning of the pulmonary and thoracic apparatus and, to this end, has written and co-authored 7 scientific publications. He has also participated in several conferences on the subject in Spain and Europe.

Thoracic experts, they participated in collaboration with Professor Chavoin to the implementation of a 3D custom-made implant to a patient who had undergone 2 thoracic surgeries in the past without favourable evolution of the pathology.

Biomedical context and reason for consultation

After the successive failures of the correction of her Pectus Excavatum by traditional orthopaedic techniques, the patient went to the clinic to find another way to treat her deformity.

Presentation of the patient

The patient has no pathological history but underwent a correction of her funnel chest during her childhood with the Nuss technique. This technique did not allow the thorax to be straightened and left two minor scars on the flanks (that have almost disappeared).

In 2010 she underwent another surgery called the Ravitch technique. The thorax has been opened vertically, between the breasts while the usual technique consists on a horizontal opening, under the breasts. Once again it failed correcting the sunken chest.

In 2017 she met us because the hole in the chest is still noticeable and her psychological discomfort still strong.

The patient has an asymmetrical Pectus Excavatum (type 3) predominant on the right and going beyond the inframammary groove. The CT scanner shows a Haller index of 7.4, expression of a large hollow. It has a strong breast asymmetry in relation to the thoracic asymmetry.

The patient undertake series of physical tests: they show that there is no functional respiratory impact of the deformity on patient’s functions.

Having already undergone 2 painful and ineffective operations of orthopaedic correction of the ribcage, the patient does not want a new failure.

During the different consultations, several possibilities of surgery are presented to her. She chose the custom-made 3D silicone implant suggested by the surgeon.

A CT scan of the patient is prescribed to perform the 3D reconstruction of her virtual body and to design an implant perfectly adapted to its deformation. The distance on the skin between the clavicle of the patient and the distal vertex is 200mm. The custom implant is 130cc, measures 160mm high, 136mm wide and has a maximal depth of 18.3mm.

The patient was operated on March 6, 2019 with an excellent aesthetic result from the placement of the implant in sub-pectoral position despite significant prior damage, consequences of the operation of Ravitch, especially in the high parts of the abdominal muscle (right ones).

The postoperative course is simple. She was able to leave the hospital 48 hours after the intervention: we performed the puncture of a serum of 35cc.

The patient came back for follow-up visits for the next 6 weeks, the first two of which resulted in a serum puncture. 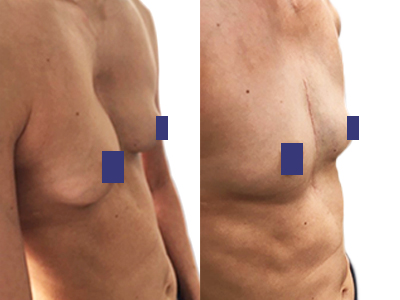 The scar from the Ravitch surgery evolves favourably, less conspicuous than before.

Note: Normally the scar is not more than 7cm long. The size of the scar on this patient is due to the horizontal Ravitch operation she underwent in 2010.

The clinical case of this patient is a typical case of recovery from Nuss and Ravitch techniques that failed to correct the sunken chest.

Indeed, the asymmetrical Pectus are difficult to correct with the Nuss technique while Ravitch may fail (as depicted in this case).

Since the patient has no functional problems, the implant is the best way for her to correct her thoracic malformation and breast asymmetry.

The patient is fully satisfied with the result, especially since the consequences were not painful and the resumption of activity much faster. The implant is set up for life in one operation.